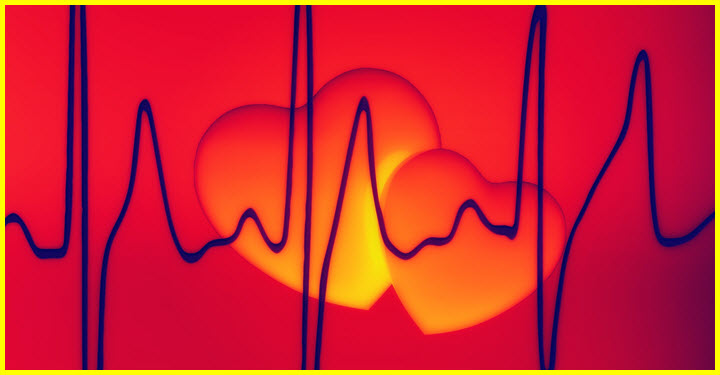 The risk of coronary heart disease can be effectively reduced from healthy lifestyle interventions, according to these recent studies reported on in the British Journal Of Sports Medicine.
They say current pathologies require a urgent paradigm shift. The conceptual model of dietary saturated fat clogging a pipe is just plain wrong.

A landmark systematic review and meta-analysis of observational studies showed no association between saturated fat consumption and (1) all-cause mortality, (2) coronary heart disease (CHD), (3) CHD mortality, (4) ischaemic stroke or (5) type 2 diabetes in healthy adults.1 Similarly in the secondary prevention of CHD there is no benefit from reduced fat, including saturated fat, on myocardial infarction, cardiovascular or all-cause mortality.2 It is instructive to note that in an angiographic study of postmenopausal women with CHD, greater intake of saturated fat was associated with less progression of atherosclerosis whereas carbohydrate and polyunsaturated fat intake were associated with greater progression.3

The inflammatory processes that contribute to cholesterol deposition within the artery wall and subsequent plaque formation (atherosclerosis), more closely resembles a ‘pimple’ (figure 1). Most cardiac events occur at sites with <70% coronary artery obstruction and these do not generate ischaemia on stress testing.4 When plaques rupture (analogous to a pimple bursting), coronary thrombosis and myocardial infarction can occur within minutes. The limitation of the current plumbing approach (‘unclogging a pipe’) to the management of coronary disease is revealed by a series of randomised controlled trials (RCTs) which prove that stenting significantly obstructive stable lesions fail to prevent myocardial infarction or to reduce mortality.5 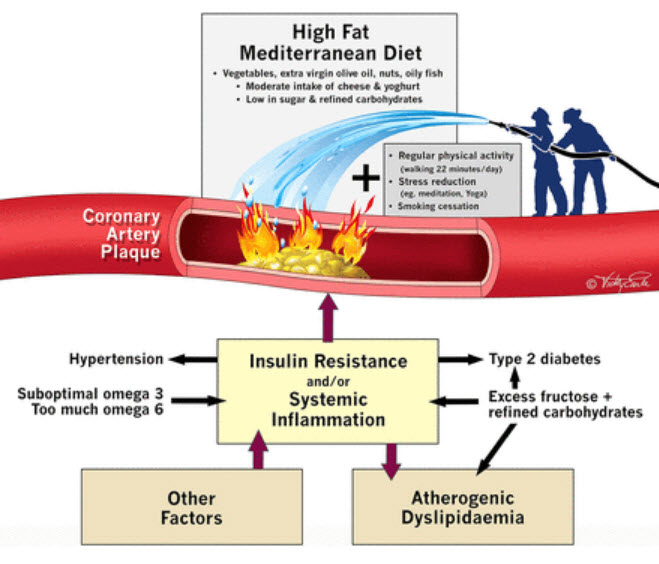 Dietary RCTs with outcome benefit in primary and secondary prevention

In comparison with advice to follow a ‘low fat’ diet (37% fat), an energy-unrestricted Mediterranean diet (41% fat) supplemented with at least four tablespoons of extra virgin olive oil or a handful of nuts (PREDIMED) achieved a significant 30% (number needed to treat (NNT)=61) reduction in cardiovascular events in over 7500 high-risk patients. Furthermore, the Lyon Heart study showed that adopting a Mediterranean diet in secondary prevention improved hard outcomes for both recurrent myocardial infarction (NNT=18) and all-cause mortality (NNT=30), despite there being no significant difference in plasma low-density lipoprotein (LDL) cholesterol between the two groups. It is the alpha linoleic acid, polyphenols and omega-3 fatty acids present in nuts, extra virgin olive oil, vegetables and oily fish that rapidly attenuate inflammation and coronary thrombosis.6 Both control diets in these studies were relatively healthy, which make it highly likely that even larger benefits would be observed if the Mediterranean diets discussed above were compared with a typical western diet.

For more on this topic as well as the reference list go to the source article.

According to Wikipedia a Mediterranean diet is:

Some important take a ways from this article are:

* no association between saturated fat consumption and all-cause mortality, coronary heart disease
* chronically elevated serum insulin at the root of heart disease, type 2 diabetes and obesity
* there is no benefit from reduced fat, including saturated fat, on myocardial infarction
* Preventing the development of atherosclerosis is important but it is atherothrombosis that is the real killer
* LDL cholesterol risk has been exaggerated
* Decades of emphasis on the primacy of lowering plasma cholesterol, as if this was an end in itself and driving a market of ‘proven to lower cholesterol’ and ‘low-fat’ foods and medications, has been misguided.
* chronic inflammatory disease and it can be reduced effectively by walking 22 min a day and eating real food.

Of course the big problem is it will take decades to change public an medical thinking.

Combine this finding with studies showing proper vitamin C consumption (real vitamin C not ascorbic acid) which prevents weak arteries in the first place and you have a winning combination for a healthy body.