Listen To What's Going On Inside 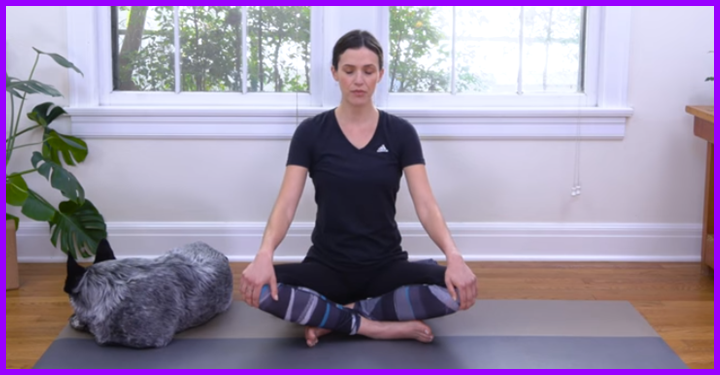 image was captured from the video

Day 14 Yoga with Adriene is about slowing it down, being still and listening to your inside.

Time on the mat is time well spent because it’s time that you get to practice listening.

If you are here for the hip dips, great.

But today's practice is about refocusing on why we are truly here.

Today is a self study & mindful mental health practice that is also a delicious and restorative day for the body, particularly your neck, back and shoulders.

Watch the video and let Adriene guide you on this journey.

Another popular type of yoga is Vinyasa Flow.

Like hatha, vinyasa is a general term that is used to describe many different types of classes. Vinyasa tends to be a more vigorous style based on the performance of a series of poses called sun salutations, in which movement is matched to the breath. A vinyasa class will typically start with a number of sun salutations to warm up the body for more intense stretching that's done at the end of class. Vinyasa is also called flow, in reference to the continuous movement from one posture the next.

For more types or yoga go to this article.

Vinyasa, also called flow because of the smooth way that the poses run together, is one of the most popular contemporary styles of yoga. It's a broad classification that encompasses many different types of yoga, including Ashtanga and power yoga.

In contemporary yoga parlance, vinyasa stands in opposition to hatha. Hatha classes tend to focus on one pose at a time with rest in between. In contrast, flow classes string poses together to make a sequence. The sequence may be fixed, as in Ashtanga in which the poses are always done in the same order, but most of the time vinyasa teachers have the discretion to arrange the progression of poses in their own ways.

In vinyasa yoga, each movement is synchronized to a breath. The breath is given primacy, acting as an anchor as you move from one pose to the next. A cat-cow stretch is an example of a very simple vinyasa. The spine is arched on an inhale and rounded on an exhale. A sun salutation sequence is a more complex vinyasa. Each movement in the series is cued by an inhalation or an exhalation of the breath.

The literal translation of vinyasa from Sanskrit is “connection,” according to Ellen Stansell, Ph.D., RYT, and scholar of yogic literature. In terms of yoga asana, we can interpret this as a connection between movement and breath or as the connection between poses in a flowing sequence.

Vinyasa allows for a lot of variety, but will almost always include sun salutations. Expect to move, sometimes vigorously, from pose to pose. Whether the class is fast or slow, includes advanced poses, or is very alignment-oriented will depend on the individual teacher and the particular style in which he or she is trained.

Some classes include some warm-up stretches at the beginning while others launch straight into standing poses. Some very popular yoga styles fall under the vinyasa umbrella, including Jivamukti, CorePower, Baptiste Power Vinyasa, and Modo. If a class is simply identified as vinyasa, it may use of aspects of several different traditions. The one thing you can be sure if is the flow between poses. The rest is up to the teacher, but you can expect to go through any combination of the poses below.

Back at this great source article you'll discover many of the different poses for this style of yoga including descriptions and images. Check it out.

Next discover how to believe in yourself.