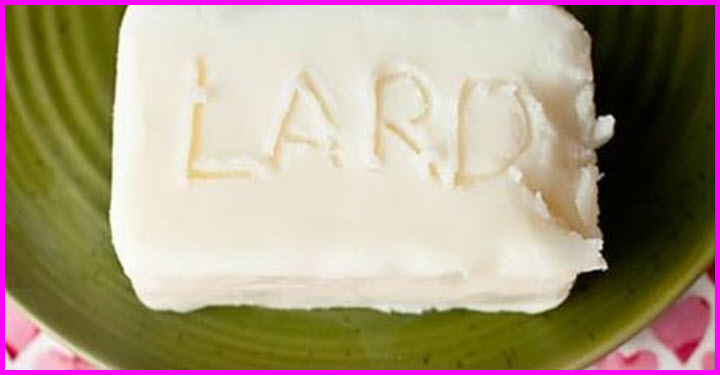 Lard Is Replacing Coconut Oil As The Fat Of Choice. Many super markets are now carrying lard for sale. What is lard? It’s been a long time since it has been a popular cooking oil. Lard is the rendered belly fat of hogs.

Lard was a staple for our great grandparents. Here are 5 advantages of lard that are responsible for its comeback.

Lard is one of the best cooking oils because of its heat stability. Roughly 40% (possibly more in pasture-raised hogs supplemented with organic grain and coconuts) of lard is made up of saturated fats, which have single bonds between carbon molecules of the fatty acid chain.

Unlike monosaturated fats, which have a double bond between carbon molecules, single bonds are relatively hard to break.

Monosaturated fats make up roughly 50% of the fat in lard, while only 10%  is polyunsaturated fat – the most unstable because of the multiple layers of double bonds in the carbon chain.

The high amount of saturated fat in lard helps to protect the other fats from breaking down and oxidizing. When fats break down, they create free radicals, which cause cell damage.

Lard is also heart-heart healthy, regardless of what outdated food pyramids say. The “vegetable” — soy, corn and canola — oil industry has worked hard over the last century to convince us the saturated fat and cholesterol in lard lead to heart attacks.

Our great-great grandparents consumed this wonderfully rich animal fat, along with butter and tallow (all grass-fed or pasture-raised at the time) and had very low rates of heart disease.

That’s probably because the saturated fat in lard increases HDL cholesterol, which is linked to a lower risk of heart disease. The cholesterol also aids the body in inflammation management and hormone production.

A meta-analysis of studies on lard conducted by the American Journal of Clinical Nutrition found no evidence that saturated fat consumption raises the risk of heart disease. The total sample size was quite large with 300,000 participants.

Not only is lard heart-friendly, but neutral in flavor. It can be used in just about anything that vegetable oil is used in.

For more on these last 3 advantages of lard head on over to the source blog article.

The featured image came from the source article.