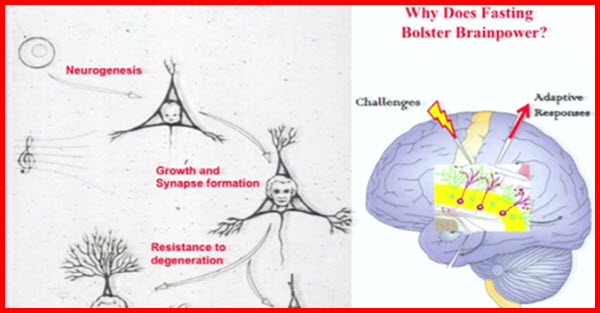 Here is a little anecdotal evidence that fasting is good for the brain. So everybody knows that in certain religions, people will fast periodically down through history. Many famous people with good brains have fasted regularly.

“I fast for greater physical and mental efficiency.” – Plato

“Humans live on one-quarter of what they eat; on the other three quarters lived their doctor”. – Egyptian pyramid encryption, 3800 BC

“Fasting is the greatest remedy – the physician within.” – Philippus Paracelsus (one of the three fathers of Western medicine)

“A little starvation can really do more for the average sick man than can the best medicines and the best doctors.” – Mark Twain

There is one thing that happens when you fast as compared to when you eat 3 meals a day. That is your body starts burning fat for energy because you deplete the glycogen stores in your liver. You also start producing what are called ketone bodies. And these ketones are very good for your brain.

To find out why your brain reacts so well to occasional fasting see what Mark has to say in this video.